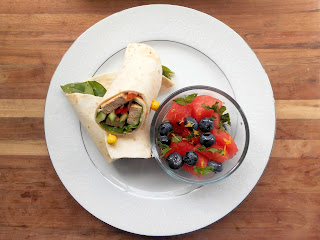 This is a tofu-and-veggie tortilla wrap made from the leftover tofu and veggies from my spring rolls with a side salad I'm glad I finally tried. This is the blueberry-watermelon salad I've seen so many places online but hadn't yet sprung for myself. But since my neighbor has been generous with her herbs, I found this recipe at Food Network and took the plunge.

It turns watermelon into something totally new! I was amazed at how well these flavors go together--and this is so pretty! I'm usually skeptical of mint but sometimes it does great things.
Posted by The Student-turned-Doctor at 3:00 PM 2 comments: 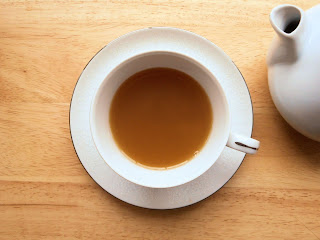 As I was going through some old cookbooks I have in hopes of being inspired to veganize something (life is not very exciting here in quarantine), I found some recipes that were vegan to begin with. But when I tried the original recipe for Russian Tea I found in 2006's All New Complete Cooking Light Cookbook, I just didn't like it. It used ground-up spices and that made the tea weirdly gritty and unpleasant.

But I still liked the idea and the flavors, so I improved on the recipe (for my purposes, anyway; maybe some people prefer the convenience/lesser expense of ground spices). And here you are!

Before we move on, though, a word on Russian tea: It isn't really Russian. The first printed reference apparently came from an 1882 New York Times article. I looked up the article; it was pretty strange. In it, a Dr. Richardson said drinking alcohol was bad while riding tricycles, as it was apt to be "embarrassing," but also drinking overly sweetened tea would make you thirsty, and he was skeptical of drinking tea with lemon ("Russian tea") because lemon might also make a person more thirsty or cause heartburn. In the end he recommended lightly sweetened tea brewed in milk and carried in a flask to be taken out with you tricycling. This probably raises so many questions, but you came here for a tea recipe, not a look back at weird medical opinions or oddly detailed concerns about riding tricycles while tipsy or thirsty being printed in the New York Times.

Today, so-called Russian tea is essentially the American South's hot tea--though iced tea is their go-to, in cold weather, many would reach for a black tea flavored with lemons or oranges and various spices. This 1896 recipe asks for a candied cherry, saying that it stands in for the Russians putting strawberries in their tea. This raises more questions, but I digress again.

This is a simple recipe (without candied cherries) and is just a way of shaking things up when you get bored of plain tea or tea with lemon. (I am continually in need of shaking something around here!) Mine uses orange juice rather than lemon, as is in the original Cooking Light recipe and as is a common variation of Russian Tea.

Pour boiling water over tea bag, cinnamon stick, and clove. Cover and steep for 4-5 minutes. It is best to do this in a preheated teapot, but use what you have. Remove and discard tea bag, clove, and cinnamon stick. Stir in orange juice and sugar (if using). Serve immediately.
Posted by The Student-turned-Doctor at 3:00 PM 2 comments:

Email ThisBlogThis!Share to TwitterShare to FacebookShare to Pinterest
Labels: Recipes 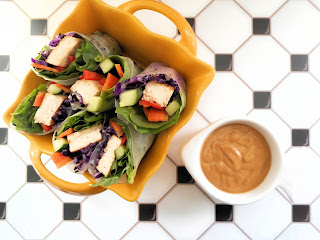 Now that tofu is more readily available, I'm happy to put some in my summer rolls. I marinated some tofu I'd cut into sticks and then pan fried it. They made it into these summer rolls alongside cucumbers, carrots, red sweet pepper, spinach, and shredded purple cabbage. So pretty, and so good with the peanut dip I made out of the leftover marinade.

Spring roll wrappers aren't the easiest thing in the world to get in quarantine, but the friend who occasionally brings me a Wegmans delivery got some for me.
Posted by The Student-turned-Doctor at 3:00 PM 3 comments: 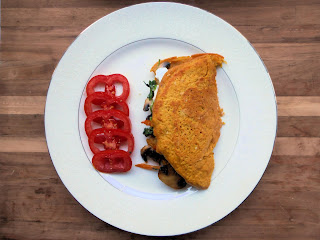 This plating seems like some sort of 1980s brunch, but I didn't intend that. I found a recipe for a veggie stuffed vegan omelet at Connoisseurrus Veg and decided to have it for dinner one night alongside some sliced tomatoes (grown by a neighbor). I stuffed mine with spinach, mushrooms, peppers, and some Violife feta. It was good! No complaints other than I am pretty bad at folding omelets, whether chickpea flour or otherwise. But oh, how I love a chickpea flour anything.
Posted by The Student-turned-Doctor at 3:00 PM 4 comments: 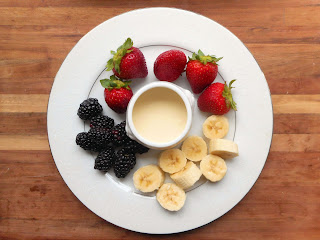 Long ago promised, I am sharing my recipe for orange marshmallow fruit dip today. With some toast spread with nut butter and some tea, it makes a great breakfast.

This dip is good with berries and bananas, but also with grapes, apples, and sectioned oranges. What I say here is largely a guide; you can adjust the amounts of the ingredients to suit your tastes and to get it to the thickness you prefer. You can also rev up the orange flavor by adding some orange zest if you have some on hand.

Stir all ingredients until smooth. Taste and adjust as needed. Serve with bite-sized fruit for dipping.
Posted by The Student-turned-Doctor at 3:00 PM 4 comments: 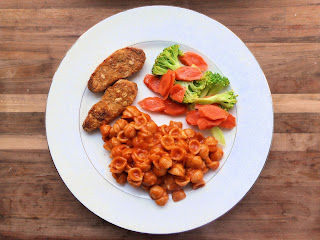 I was in the mood for kid food, I guess. The wildest of cravings had hit. I had a few Gardein crispy tenders with steamed broccoli and carrots and a pasta dish reminiscent of Chef Boyardee.

The key to making something taste like Chef Boyardee is to mix tomato sauce and cheese. I had some leftover Annie's vegan shells in creamy sauce and added some canned tomato sauce and then melted a slice of Field Roast Chao cheese into it. It was right on the nose. So if you ever have a craving for a can of pasta in a salty, cheesy tomato sauce like that, you can skip the canned pasta (thank goodness) and still fulfill it. I personally think this was a few notches above Spaghetti-Os, myself.
Posted by The Student-turned-Doctor at 3:00 PM 4 comments: 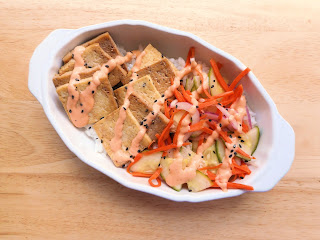 This was a way of dealing with a bunch of stuff in my fridge that needed eating: A kind of deconstructed banh mi inspired rice bowl. It had some caramelized tofu from yesterday, some quick pickled vegetables (red onion, cucumber, and carrots), sriracha mayo, and sesame seeds. I loved this. I guess I'm a sucker for anything with Vegenaise in it.
Posted by The Student-turned-Doctor at 3:00 PM 4 comments: